Did I ever mention that I have some amazing friends? I admit that I don't have that many, but what I lack in quantity, I surely make up for in quality. I am truly grateful to have met some of the most awesome people in the world, and be able to call them friends.

Now, a little background on this particular friend-we (he and I) met on a cross-country bus trip, from Toronto to Vancouver. We both smoked, had a thing for Kate Beckinsdale, and bemoaned the entire trip. Over the few days on the bus, we became friends. Once we arrived in Vancouver, we exchanged contact info, and, to be honest, I thought that was it.
But, of course, it wasn't. We kept in contact, and it has been 7 years of awesome friendship, spanning breakups, weddings, WoW addictions, multiple moving trips (ours), babies (his, not mine) and more coffee than should legally be allowed.

Anyways, thanks to his awesomeness, Kristan and I got to go out for Fondue for a belated Valentines day date! It was belated A. because we couldn't get a reservation in time and B. because the hubs was sick on Valentines, and I stayed in reading manga (not complaining!) 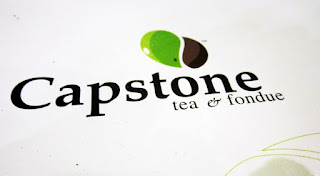 The place is called Capstone tea and fondue, and is located downtown Vancouver, on Robson St. It's all white and pale green and surprisingly relaxing, given that it is almost always entirely booked. 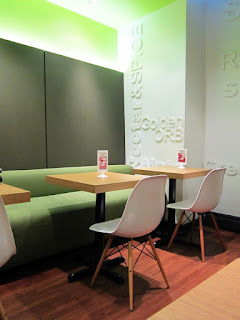 Now, Vancouver is all about Asian fusion in almost everything it does. It comes with the territory of being the most Asian city in Canada, and having caucasian be a minority in this city. For those who don't know, fondue is a Swiss dish, which consists of melted cheese and chocolate, served with fresh fruits, vegetables and bread for dipping. Being in an Asian fusion city, all the tea options were typically Asian-matcha, green, green matcha, oolong, and so forth, as opposed to European-orange peako, English breakfast, or Earl Gray. I had an ooling tea, and the hubs had a London Fog (early gray with steamed milk foam) 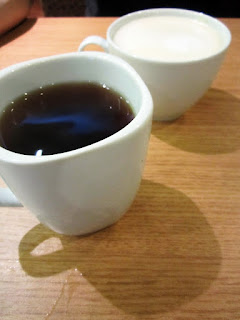 We sat with our drinks for a little while, before we got the set menu of fresh fruits and veggies, bread and-of course-the warm cheese and chocolate. Now, originally, it didn't look like a lot, but, wow, was it ever filling! It totally took the place of dinner, and what  a wonderful dinner it was! 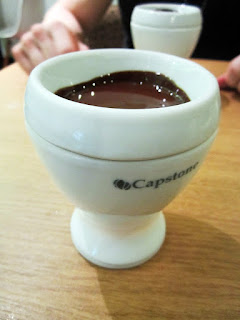 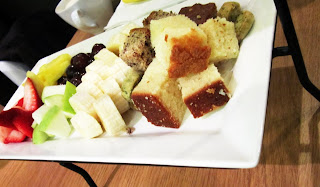 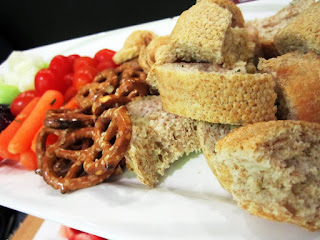 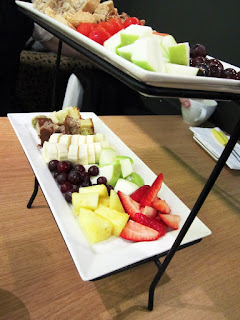 It was a lovely experience, and one I would love to have again. It was healthy, delicious, filling and a lot of fun to do with people that you love. I'm hoping that I get to do this as a double date sometime soon! Maybe in Switzerland, which would be amazing. I wonder how different it is there, in its home country. Although, the man who opened the restaurant is Swiss, i wonder if he changed the original recipes, and, if so, by how much.
xo
Posted by Unknown at 11:00