Remember that time that we went to Japan, so many months ago? Alright, so it was only like, 3 months ago, but it feels like it was a lot longer.
While we were there, we went to this place called Sky Adventure land. Which is kind of like an obstacle course. In the air. With more ropes, and less safe. Well, no, it WAS safe, I am just a weenie. 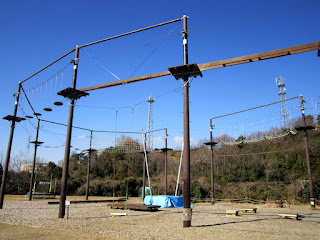 Looks awesome, right? It was. There was the course, zip lining, a giant swing, and a trampolene. For 5,000Yen, you can use the entire grounds for the entire day. And, as I learned from the people I was with, about 3 goes around the course is enough, since it gets exhausting. 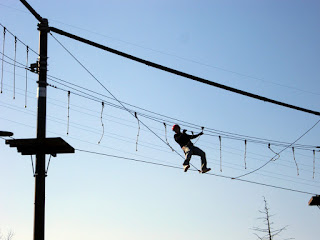 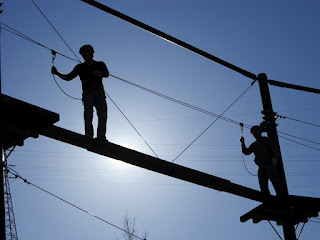 I didn't make it all the way around, but I did make it fairly far, considering a drunk hippo on crack has more balance than I do. I did, however, have a lot of fun on the swing. Although, not enough fun for people to take pictures of, apparently. 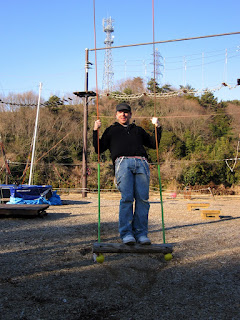 So, after we had our fun, the awesome staff at the venue asked to take our pictures. Naturally, we obliged, and guess what? We were featured in the Sky Adventure staff blog! You can check it out Right here  Awesome, right?

If you are ever in the Kobe/Osaka area in japan, I think that Sky Adventure land is totally a must see and do. I had a blast, and would go again, in a heartbeat. Once my balance gets better, at least.
Posted by Unknown at 14:00