This past weekend, I had the opportunity to go see a K1 muay thai championship fight. It was the amateur circuit, of course, but it was still pretty badass. I have no idea who was fighting, or what, exactly, the belt was, but it was a lot of fun.

I don't think I ever mentioned that I did some muay thai training back when I was still in Canada. I plan to go back and train when I go back, but that won't be for a few months yet. I love fighting. I love the workout, the control, the power of it all. So to be able to see a real match was amazing.
I was also fairly impressed with how much money was put into the production of the show. Music, lighting, a film crew, round girls and even pyrotechnics. It was impressive, even more so by the fact that there were only maybe 200 people there.

Apparently, Korea doesn't go half assed for anything.

I got some video of it, but my man hasn't had time to edit it yet, so that will have to wait for later. But for now, here are a few pics, which may seem boring-and for some, they may be-but, it was a cool fight. 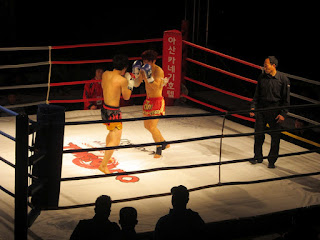 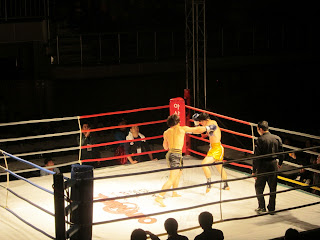 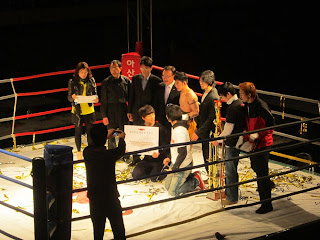